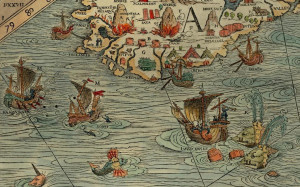 The southern coast of Iceland on the Carta Marina (1539) by Olaus Magnus. It shows trading ships from different countries and cities (Hamburg, Bremen, Lübeck), merchant booths, harbours, stockfish and sulphur.

During the course of the 15th century merchants from northern Germany began to expand their trading links with the North Atlantic islands of Shetland, the Faroes and Iceland. In the following two hundred years they became the most important trading partners for the islanders. Their main interest was the great demand for stockfish, a well preservable source of protein, in the urban centres of Europe in the late Middle Ages. Other north Atlantic goods of interest for mainland Europeans were sulphur (used among others for making gun powder), fish oil, wadmal (a coarse woolen fabric), and falcons (used by the nobility for hunting). At the same time, the inhabitants of the North Atlantic islands were dependent on foreign merchants for many commodities such as timber, metal products, cereals, beer, fine fabrics, and clothing. 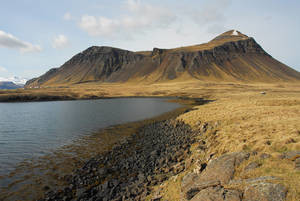 The harbour Kumbaravogur on Iceland, frequented by merchants from Bremen in the late Middle Ages. Photo: Natascha Mehler

Trade with regions north of Bergen in Norway, including the North Atlantic islands, was officially prohibited by the Hanse. This had to do with the position of Bergen as a transit point for trade with northern Europe, which was dominated by the Hanse, predominantly by merchants from Lübeck. In spite of this, hanseatic merchants, predominantly from Hamburg and Bremen, began to trade directly with the islands from the early fifteenth century onwards. Through these commercial links and the extensive exchange of goods and thoughts merchants influenced the economy and culture of these islands. However, these economic and cultural connections have never received much scholarly attention.

An interdisciplinary research team drawn from the disciplines of archaeology, history and archaeozoology investigates the many facets of this trade. Our team members (see: meet the team) cover the various aspects of the connections of German merchants with the North Atlantic. The main objectives include: how did trade on the North Atlantic islands operate, and how was it regulated? How did merchants and sailors interact? Which ships were in operation? How did these trade relations impact both societies?

Work is carried out at the German Maritime Museum (Deutsches Schiffahrtsmuseum) in Bremerhaven and at the UHI Archaeology Institute based at Orkney College. We are generously funded by the Leibniz Association, the Arts and Humanities Research Council (AHRC) and the German Research Foundation (DFG, Deutsche Forschungsgemeinschaft). Cooperations exist with the National Archives of Iceland (Þjóðskjalasafn Íslands), Shetland Museum and Archives, and Faroese National Heritage (Søvn Landsins).

For more information, see the descriptions of the current research project “Looking in from the edge (LIFTE)” in English and German and the former project “Between the North Sea and the Norwegian Sea: interdisciplinary studies of the Hanse” (in German).