How to recognise stockfish from its bones

For most readers of our blog, probably the most mysterious part of our research is the work of Hans Christian Küchelmann, archaeozoologist, who uses archaeological finds of fish bones as traces of the late medieval North Atlantic (stock)fish trade. A fish bone found in the ground, however, does not say where the fish once came from or to which fish it belonged. So, how can one identify a stockfish merely by its bones? This blog post will shed a light on that mysterious procedure.

In order to be able to identify a stockfish bone, it is essential to know how stockfish was produced. Luckily, stockfish is made in Iceland and Northern Norway to this day in ways that have hardly changed over the centuries, so in combination with historical sources, we can reliably reconstruct what a medieval stockfish must have been like.

Stockfish is made in polar regions from fish from the Gadidae family where they are hung to dry outside during the winter. Due to climatic conditions this is only possible in arctic regions as the cool weather prevents the fish from rotting before it dries. However, the entrails must be removed before the fish is hung to dry, and the heads are cut off. This is roughly done with two methods: a) the fish is gutted and beheaded, the rest of the body left intact (rundfisk), or b) the fish is beheaded and split in two, removing the entrails as well as most of the spinal column, and then hung to dry. The latter method is called råskjær in Norwegian (rotscher in the Low German medieval documents). As this leaves only a few caudal (tail) vertebrae in the stockfish, most bones of stockfish will come from rundfisk.

As mentioned, stockfish was made from species of the Gadidae family. A trained eye will have no problem recognising a bone from a Gadidae fish in most cases. Due to long travel times and the absence of freezers in pre-industrial times, these fish could only be transported in preserved form, either salted or dried. Hence, a find of a Gadidae bone, especially on inland sites, hints at having belonged to a stockfish.

However, in coastal areas these fish were also eaten fresh, so how do you know a bone is from stockfish in that case? It is necessary to look at the distribution of the different Gadidae species. Three of the species that were used for producing stockfish, namely saithe (Pollachius virens), ling (Molva molva), and tusk (Brosme brosme) do not appear in the Southern North Sea and Baltic Sea. Bones from these three species found on the European mainland, especially in inland areas, are therefore a strong indicator for stockfish.

By far most of the stockfish, however, is and was made from cod (Gadus morhua), which does live in the Southern North Sea and the Baltic Sea. Bones of cod could therefore also belong to locally caught (and therefore not dried) fish. So we need another indicator to distinguish a stockfish from fresh local cod. The cod which live around the German shores are mostly smaller juveniles, older and larger fish live further North. By comparing the size of the bones to those of complete skeletons it is possible to estimate the size of the fish they belonged to. Bones belonging to fish larger than c. 75cm are less likely to have been local catch and were probably imported in dried form. Moreover, a high prevalence of fish in a specific size range is an indicator of stockfish, as these were sorted and sold according to size, whereas local catches will likely show a higher variety of fish in different sizes.

Because the head of the fish was cut off and remained at the production site one can expect head bones to be absent at consumption sites. Indeed, we find a clear overrepresentation of post-cranial (i.e. bones not belonging to the head, from cranium: head) bones on some sites in mainland Europe. On some archaeological sites in Iceland, for example, there are almost only cranial bones which is a clear sign that stockfish was produced there.

Archaeological finds of cod bones (brown), compared to modern bones (white). The cleithra (top), which are located directly behind the head of the fish, but remain when the fish is beheaded, clearly belong to larger individuals and are systematically cut off on the right, indicative of stockfish production. Image: Hans Christian Küchelmann

The production and consumption of stockfish can also leave traces on the bones themselves. For example, the heads of fish were chopped of in a standardised way, leaving clear-cut chopping edges on the bones of the shoulder girdle directly behind the head. Also, the preparation of stockfish required hammering the fish for a while before soaking it, to make the flesh softer. As we have seen from our own experiences in preparing stockfish, this procedure can destroy or deform the vertebrae of the fish. Hence, deformed or broken vertebrae can be a sign of stockfish consumption in the archaeological record.

Further, more advanced evidence from the North Atlantic stockfish trade can be acquired by applying methods such as aDNA analysis and isotope analysis, which can potentially retrace the remains of an animal to the area in which it lived. However, an explanation of these techniques might be a topic for a next post. 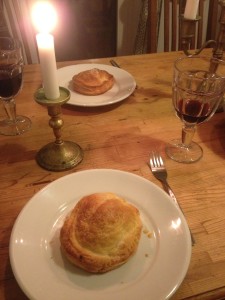